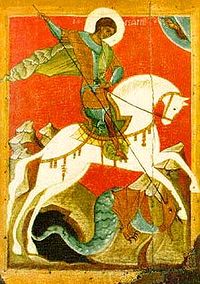 Today said one of the biggest Christian holidays - the day of St. George

St. George is venerated as a martyr for the Christian faith. St. George is one of the most revered saints in the Orthodox Church. Immortalized in the myth of St. George and lamia he is patron of Canada, Catalonia, England, Ethiopia, Georgia, Greece, Montenegro, Portugal, Serbia, the cities Istanbul, Ljubljana and Moscow.

St. George is revered and glorious by Christians and Muslims. According to approved by the Church Life of the Saint George was born. in Cappadocia (Asia Minor). With a brilliant time for education, only 20 years old, he received high military title as a talented soldier and commander in the army of the Roman Empire. Son of wealthy parents and Christians, he became a passionate supporter of Christian faith. As her defender was subjected to cruel torture and was beheaded by the Roman Emperor Diocletian (284-305). George becomes a model of the ideal warrior-Christian and patron saint of war and the army.

Day e one of the largest folk festivals, which marks the beginning of summer and the new business year. In folk St. George is the patron of shepherds and flocks. He is the patron and the army and is celebrated as the Day of Bulgarian Army.