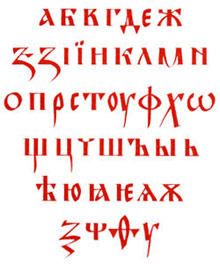 The Cyrillic alphabet is one of the two writing systems (together with the Glagolic alphabet) used in Old Bulgarian literature.

The Old Bulgarian Cyrillic alphabet was based on the 24-letter Greek uncial script, adding 12 letters for specific Old Bulgarian sounds such as [b], [zh], [ts], [ch], [sh], [sht], back [yer] (the hard sign ъ), front [yer] (ь), and [yu]. In the Cyrillic and Glagolic alphabets, some letters have variant forms and combinations, some borrowed from Byzantine rules and others from the Proto-Bulgarian script. The invention of the Cyrillic alphabet came as a result of the establishment of Eastern Orthodoxy in Bulgaria during the rule of King Boris I of Bulgaria. The Cyrillic alphabet has been attributed to Kliment of Ohrid, a disciple of Saints Cyril and Methodius, and its name is in honour of Constantine-Cyril the Philosopher. The idea of creating a new alphabet in Preslav, the capital of the First Bulgarian Empire, can probably be attributed to the ruler Simeon the Great, who was the most educated person in Bulgaria at the time and was greatly influenced by Greek culture. The Byzantines themselves referred to him as a “half Greek" (“emiargos", as the German chronicler Liudprand of Cremona refers to him in the 10th century). His passion and his political ambition to be “the Emperor of Bulgarians and Byzantines (Romans)" may have driven Simeon to formalise a Bulgarian alphabet based on the Greek alphabet and some new letters. This is common practice in the creation of any alphabet. For example, the Latin alphabet was based on the Greek one, and the Greek alphabet had its origins in the Phoenician writing system.