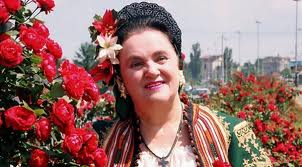 The famous folk singer died Nadka Karadjova - singer of folk songs, a soloist of the State Ensemble Philip Kutev, one of the most popular Bulgarian folk singers.

Nadka Karadjova is a winner of awards "earned" and "folk" artist. She was awarded with numerous prestigious awards and honors such as: "Cyril and Methodius Order of People's Republic of Bulgaria," order "Stara Planina", called "Bratislava", "Golden Quill Award and Nestinarka the International Folklore Festival in Burgas . More than 40 years singing in the State Ensemble "Philip Kutev. She has participated in choirs "Cosmic Voices" and "Great Voices of Bulgaria". One of the founders of the quartet Slavey. In 1978 her song "Zableyalo my lamb," won a radio competition "BBC-2. In England, was issued a plate with its performances. Drive with its participation was released in Japan as part of the series "Bulgarian polyphony. In 1994 her name was included in The World Encyclopedia of Music, published in London. Makes hundreds of studio recordings for the funds of the Bulgarian National Radio and Bulgarian National Television. Issued 27 albums and performed in many movies.