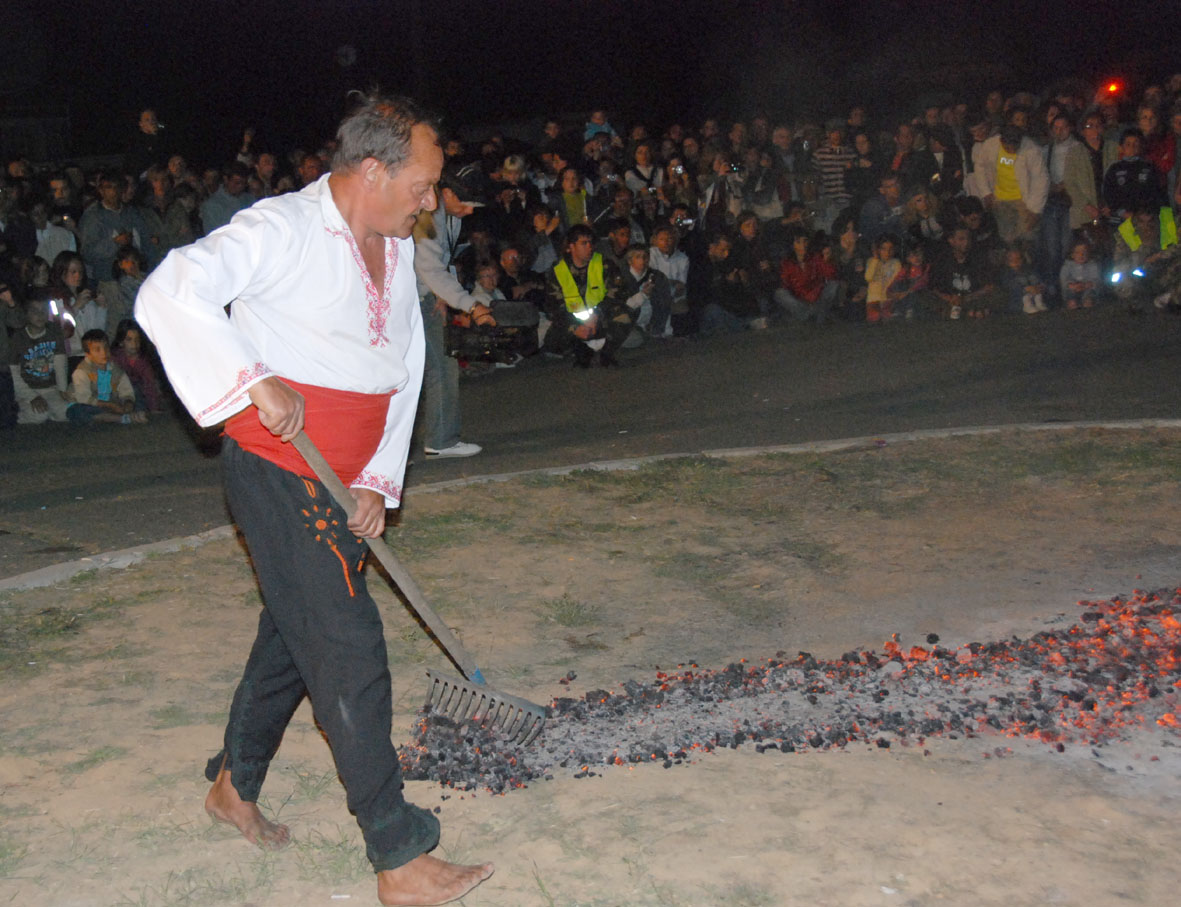 Nestinarstvo (Greek: Αναστενάρια) is an ancient Bulgarian and Greek rite in which people dance barefoot on glowing embers (live coals).

By tradition, nestinari (fire dancers) dance in the night of the feast day of Saints Constantine and Helena (3 and 4 June, according to the old style). At the beginning of the 20th century the ritual spread around several Bulgarian and Greek villages in Eastern Thrace, some of which were incorporated into Bulgarian territory in 1913, while the rest remained as part of Turkey. The Greek population of the now Turkish villages migrated to Greece in the 1920s and took the nestinarstvo rituals with them. There are various theories on the semantics of the noun αναστενάρια, (anastenaria in Greek and nestinarstvo in Bulgarian). Some suggest that it derives from the Greek word “anastenagmos", meaning a sigh or moan, which the nestinari do when in a trance. Others suggest that the name derives from the Greek “(h)estia" meaning fire.

In Bulgaria the ritual is preserved in its authentic form in one place only: the village of Bulgari in the Mount Strandzha region in South-East Bulgaria. In the past, the Greek villages of Kosti and Brodilovo, the Bulgarian villages of Gramatikovo, Slivarevo and Kondolovo, and a single village in the Rhodope Mountains were also “nestinarstvo" villages. The fire dance is practised in other regions throughout Bulgaria, mostly as a tourist attraction. Nestinarstvo is performed in several villages in the Greek region of Macedonia, populated by descendants of Thracian refugees such as Karakavak (Mavrolevki) near Drama, Butkovo (Kerkini) and Kakaraska (Agia Eleni) near Serres, Lagadina (Langadas) near Thessaloniki and Meliki near Veria. The first document on the ritual dates back to 1862, written by the Bulgarian poet Petko R. Slaveikov. Some historians believe that the rite dates back to Thracian pagan rituals. Although the nestinari carrying an icon of Saints Constantine and Helena (Emperor Constantine the Great (who gave Christianity a legal status equal to the other religions in the Roman Empire with the Edict of Milan) and his mother Saint Helena) when treading on the embers, the ritual has never been acknowledged by the Church, which persecuted it and the nestinari dancers were demonized as possessed by the devil. The last severe persecution began in 1913. It was then when some nestinari from the Greek village of Kosti, some of whom were banished from the village after the 1912-1918 wars, gave up the ritual. In the period from 1941-42 nestinarstvo dances were preserved in only three villages: Bulgari, Kosti, and Gramatikovo, where it remained until 1948-1949. The original ritual was reinstated at the beginning of the 1990s.

Early in the morning on the Saints" day, during a pilgrim procession led by the nestinari, three youths carry the icons to a holy spring (ayazmo) near the village. All residents join the procession. They consecrate the icons at the spring and dance a “horo" dance to the sound of a drum and bagpipe. The spring water is believed to have the most healing qualities at this time of year. After the consecration of the icons, the procession goes all over the village and the nestinari enter a chapel (called a “konak"). This is where the icons of Constantine and Helena are kept. The nestinari spend the day here, listening continuously to a special drum rhythm which sends them into a trance. Then they start dancing, bearing sacred objects – icons, cloths, and church lamps. Meanwhile a fire is lit at the village square and the most elderly nestinar dancer (male or female, too old to dance) keeps it burning. At dusk, they all start to spread the fire to form a bed of smouldering embers about 2 metres wide and 5 to 6 cm thick. The first to tread on the embers are the most elderly active dancers, who go round the embers three times and then crosswise on them. Only then does the dance start in earnest. The nestinari tread on the smouldering circle with a piercing cry. They walk across the embers, pressing their feet against the live coals, shouting all the time. During the dance, the nestinari carry the icon of Saints Constantine and Helena decorated with flowers. In their state of trance, the nestinari often voice prophesies. Gradually the dance slows down, the nestinari"s movements calm down and eventually the dance comes to an end. Remarkably, after the dance the nestinari"s feet do not show the slightest trace of injury or burns.

In some villages the ritual continues for two days, and during the second day a ritual procession is held again. The young icon-bearers enter every house and people dance a “horo" on the main village square. The nestinari perform their dance once again to the sound of ritual music. In the end they cross themselves three times, kiss the icon and go to the chapel.

In the past, the Nestinarstvo rite would only be practised by nestinari families, but sometimes people present at the ritual would also fall into a trance.